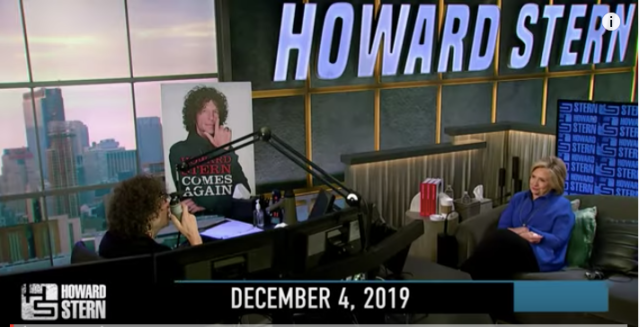 It finally happened.  Hillary Clinton appeared on the Howard Stern radio show yesterday morning for a Sirius discussion.  It was a newsworthy event, garnering attention across many media outlets ranging from the Washington Times to the New York Post.

The impetus for the appearance may have been boosting the sales of their books during gift-giving season,  Howard having come out with “Howard Stern Comes Again” this year and Hillary having recently released “The Book of Gutsy Women” co-authored with daughter Chelsea.

Stern’s book speaks to his gift as an interviewer, and it is revealing to read how he tried and failed to have Hillary on as a guest during her run for the Presidency in  2016.  Here is an excerpt on that from his book:

“I don’t think I’ve ever tried harder to get a guest than I did with Hillary Clinton in the run-up to the 2016 election.

As you know by now from reading this book, Donald Trump and I go way back, and had I endorsed him for president, publicly hitched myself to his candidacy and gone all in, who knows what might have come from it. Instead of writing this book, I might have been sitting on the Supreme Court. Chief Justice Stern. Imagine me in my custom John Varvatos robe, banging my gavel and picking the pubic hairs out of Clarence Thomas’s Coke can. Maybe I’d be chairman of the FCC, in charge of the government branch that tried to put me out of business. Think of the cosmic irony in that. Perhaps a cushy ambassadorship someplace warm, or at the very least I might have wrangled an invitation to Camp David.

But I’m no sellout. I have been a fan of Hillary for nearly as long as I’ve known Donald. This woman has dedicated her life to public service, and that’s what I look for in a candidate. She was a first lady, senator, secretary of state. Her entire life has been in the service of our country. People would say to me, “You’re just voting for her because she’s the lesser of two evils.” I’d say, “No, I wanted her as president before I wanted Barack Obama.” I love Barack Obama, but I was a Hillary Clinton supporter going all the way back to 2008. I think she would have been a great president.

I saw long before anyone else that it wasn’t going to be easy for her to beat Donald. I didn’t see her connecting. My audience spans the entire country, including the swing states. I know these people. They’ve been listening to me my entire career. I could tell that they were just not feeling Hillary and that they were really embracing Donald. As I said in this book’s introduction, I consider Donald Trump one of the best radio guests ever. He just knows how to connect with an audience. Hillary does not.”

Howard voiced that same opinion on Stephen Colbert’s Late Show in May as part of his book promotion tour, speculating that an appearance on his show might have swayed the vote to her in key electoral states.

Howard’s self-importance is always on display, and much has been made of Hillary’s self-denial with respect to losing the election in 2016.  But regardless of what one thinks of Howard Stern or Hillary Clinton, yesterday’s wide ranging interview spanning 2 hours and 24 minutes is entertaining if not insightful, and you can listen to it in its entirety here.