Home Stretch Begins With a Walk-off 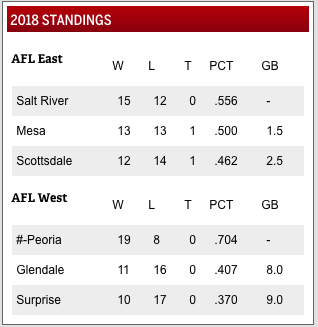 So here we are, in the last week of the Fall League Season, with Peoria having clinched the AFL West but the East still up for grabs.  Yesterday’s Salt River extra innings loss coupled with a Scottsdale walk-off kept our Scorpions mathematically alive in the East.  With three games left, the Scorpions need to win all three and Salt River has to lose their  three remaining games.  Should that happen, the Scorpions can go to the championship game depending on what Mesa does.  If Mesa wins all three they finish with a better record; but if Mesa wins two of three they tie with the Scorpions and presumably have a one and done tiebreaker game on Friday before the Championship Game on Saturday.

Phils’ first base prospect Darick Hall needed to put up better numbers in the Fall League than his .224/.713 at Reading in order to have a shot at advancing to AAA.  Frankly even with a stellar showing for the Scorpions, the emergence of Rhys Hoskins at 1B for the Phils probably meant that Hall would begin the spring in AA.  Hall began the Fall slowly with the Mets’ prospect Peter Alonso making more of his opportunities playing first base.  But lately Darick has been pummeling the ball, and as he came to bat as a pinch-hitter in the bottom of the 9th yesterday with the bases loaded and Scottsdale down 4-2, he had a chance to position the home team for a walk-off.

Sure enough, “Big D” worked a 3-2 count and, after fouling off some tough pitches, came through with a solid base hit to right plating a runner from third and pulling the Scorpions to within a run.  In his last 5 games, Darick has gone 7 for 16 with 2 HRs and 5 RBIs, pushing his Fall numbers thus far to a resepctable .250/.772.  His 4 HRs and 12 RBIs places him second on the team in those power categories to Peter Alonso’s 5 HRs and 19 RBIs, while Pete’s overall numbers have dipped to .222/.737.  That set the stage for the Mets’ twenty year-old light-hitting prospect Andres Gimenez to be the hero which he promptly did by lining a shot into the left/center field gap to earn the Gatorade walk-off.

Although we tend to dwell on the noise that bats make, I would be remiss if I didn’t mention the stellar outing by Phils’ prospect Luke Leftwich tossing 1.2 scoreless innings to keep his ERA at zero point zero, and lower his WHIP to 0.87 over 8 games.  Our Scorpions are in Scottsdale again this afternoon, this time to knock off the front running Salt River Rafters, while pulling for Peoria to beat Mesa.  Should that happen, it will pave the way for an exciting finish to the Fall.