Another Posthumous Coming Out Party

Toward the end of his life, the neurologist Oliver Sacks reflected on his wild oats days atop motorcycles and muscle men in On the Move: A Life. Dr. Sacks never entirely shed the identity of his youth, choosing rather to conceal it for professional purposes and subjugate it to some extent for personal reasons.

Dr. Richard Alpert’s life followed a similar path as Dr. Sacks in terms of personal proclivities, but a very different one in terms of public persona. Raised in a secular Jewish environment, Richard Alpert’s father Gregory wanted him to go to Medical School. The senior Alpert was the first Chairman of the Board of Trustees at Brandeis University, and picked up the phone to have Richard admitted despite his test anxiety and poor grades. But Richard decided that he was better suited to psychology, and ultimately went on to get his master’s in the field from Wesleyan University and his doctorate from Stanford.

After a visiting professorship at U.C. Berkeley, Richard returned to the East Coast to accept an academic post at Harvard where he hooked up with the infamous Timothy Leary and a partnership in serotonergic psychedelic drugs was born to explore inner consciousness. Ultimately seeking something less ephemeral than the ups and downs of psilocybin and LSD, Richard venture to India where he literally and figuratively sat at the feet of the Maharij-ji who helped him transform from Richard Alpert to Ram Dass.

I just finished reading Being Ram Dass, and it is an eye-opener for anyone wishing to gain a better appreciated of Alpert’s transformation. There is renewed interest in the path that he traveled because of the resurgence of interest in Psilocybin for medicinal purposes. Here is an excellent article on The Therapeutic Potential of Psilocybin published in a peer-reviewed journal last year.

A litany of rich and famous individuals or groups who travelled to India in search of inner enlightenment are detailed in the book. Many acknowledged having been heavily influenced by his first book, Be Here Now. It rapidly became a New Age Bible of the 1960s.

The phrase “Turn On, Tune In, Drop Out” was popularized by Timothy Learn in 1966, and was reflected heavily in pop culture and particularly in pop tunes. As an example “Turn On, Tune In, Turn Your Eyes Around” from the lyrics of the one-hit wonder band, Strawberry Alarm Clock.

I take eyes as representative of how Ram Dass was able to channel his earlier impulse toward social psychology into being a global agent for change. In particular, he writes in the book about his role in co-founding the Seva Foundation, a volunteer organization that restores sight to the needy through cataract surgery in India. 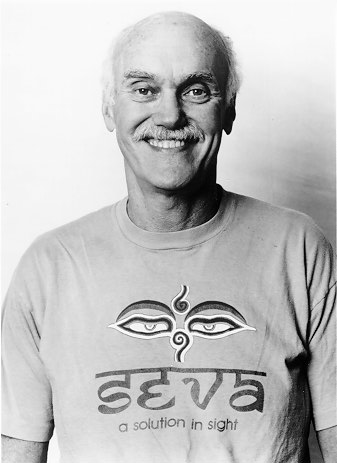 You may have heard of the gentleman who co-founded Seva with Ram Dass. His name is Larry Brilliant, a tough name to live up to but one that he does with aplomb. (The surname of his Jewish grandparents was Brilladentov, though I can’t tell you for sure what that means.) With his newly minted M.D. degree that would have made Richard’s dad proud, Dr. Brilliant sought out Maharij-ji in India at the same time as Alpert. As he describes it, Maharij-ji told Larry to ditch the robes and instead wear a three-piece suit, become a mainstream epidemiologist, and foretold that he would help eradicate smallpox which he did. Brilliant recounts this in his TED talk in 2007, shortly after becoming Executive Director of the philanthropic arm of Google in 2006.

5 Responses to Another Posthumous Coming Out Party