We’re up to דף פ עמוּד א, continuing the theme of the husband’s rights as they pertain to being reimbursed for his expenditures on the נִכְסֵי מְלוֹג. 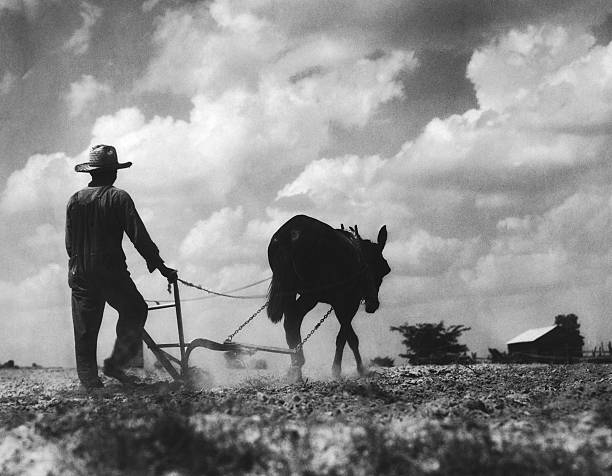 a) Since the husband and not the wife hired these sharecroppers, their rights cannot exceed those of the husband himself. If the husband who consumed any of the field’s profit receives nothing further from the property, neither can they. Nor can they demand compensation from the husband. They knew when they entered the field that it was נִכְסֵי מְלוֹג, and therefore they accepted the risk that if the couple divorced they’d receive nothing. Or …

b) Although they came to work at the husband’s initiative, the land needs sharecroppers even if the husband weren’t in the picture. Since the wife would have had to hire them, and she benefits from their work, perhaps they should received their share of the increased value of the field due to their work.

In what way is this case different from that of one who entered the field of another and planted it without permission? In such a situation one evaluates his expenses for him and the value of his enhancement of the field, and he is at a disadvantage. Therefore, he always receives the smaller sum, whether it is equal to his expenses or the enhancement of the property. In this case too, even if the sharecroppers are viewed as unauthorized occupiers of the land, why shouldn’t they be treated like one who entered another’s field without permission and receive at least the smaller sum (rather than nothing, like the husband)?

הָתָם לֵיכָּא אִינִישׁ דְּטָרַח, הָכָא אִיכָּא בַּעַל דְּטָרַח – Our Gemara answers that the two cases are not comparable: There (in בָּבָא מְצִיעָא), when one enters another’s land, it’s presumably because they saw the opportunity to work it since no one else was around. Here however the husband is available to work the land, (and the sharecroppers working on his behalf remain only while he is in the picture).

The Gemara then asks the question as to what the fundamental purpose of the husband having ownership of the פֵּירוֹת is. Was that something given to him outright and he has the authority to do whatever he pleases with it including selling it? Of, were the right given to him only without the ability to transfer it, since the חַכָמִים wanted to make sure that the household had food on the table (מִשּׁוּם רְוַוח בֵּיתָא). Naturally there’s an argument as to whether or not a sale of the פֵּירוֹת by the husband is a valid sale.

Rav Pappa said that יהוּדָה מָר בַּר מָרִימָר related an opinion from Rava based on the following incident. A woman brought two servants into the marriage as part of her dowry. Her husband took a second wife (permitted in those days) and used one of the servants to assist the second wife. The servant has the same status as נִכְסֵי מְלוֹג, and therefore when the first wife complained to Rava that the servant wasn’t the husband’s to appropriate to his second wife, he dismissed her complaint. Ah, but the Gemara notes, you can’t infer from that case that they husband has the independent rights to transfer the servant. Why? Because the household still benefitted from the second servant still remaining on the premises.

To review, there two opinions as to why the husband can’t sell the פֵּירוֹת of the wife’s נִכְסֵי מְלוֹג:

What is the practical difference between these two opinions?

Thus far we’ve been addressing the rights of a husband. Would the same considerations apply to a יָבָם vis-a-vis his rights to the widow’s נִכְסֵי מְלוֹג? That is the subject of our next Mishnah:

With regard to a widow waiting for her yavam who had property bequeathed to her, Beis Shammai and Beis Hillel agree that she may sell or give this property away, and the transaction is valid. What happens if she dies before יִבּוּם was made with her brother-in-law?

Beis Shammai say that since she was not yet remarried, the husband’s heirs, such as his brothers or father, divide the property with her father’s heirs. Beis Hillel say that the property retains its previous ownership status, and therefore the כְּתוּבָּה is in the possession of the husband’s heirs, as they are responsible for its payment. As for the property that comes and goes with her, it is in the possession of the heirs of the woman’s father (since it belongs to the woman).

What happens after the יָבָם marries his brother-in-laws widow? Her legal status is that of his wife in every sense, except that the responsibility for payment of her כְּתוּבָּה is carried out through mortgaging the property of her first husband, not that of the יָבָם.

The Gemara poses the dilemma of who is obligated to make the arrangements and bear the expenses for the burial of a widow who did not make יִבּוּם with her brother-in-law before she died. Must the husband’s heirs bury her, as they inherit the כְּתוּבָּה, or perhaps her father’s heirs are obligated to bury her, as they inherit the property that comes and goes with her? Rav Amram said that the heirs of her כְּתוּבָּה are obligated in her burial. This indicates that her husband’s heirs, who inherit her כְּתוּבָּה, must attend to her burial.

A protracted discussion follows about property rights due to the יָבָם again wrapped up in the terms of the כְּתוּבָּה. A range of possibilities are entertained, but frankly it’s too convoluted to go through the entire discussion here, so I refer you to the actual text and/or Rabbi Stern’s video embedded below. Let’s Zoom ahead instead to a specific case that occurred in Pumbedisa that illustrates some of these principles:

A certain man had a יְבָמָה who happened before him for יִבּוּם in the city of Pumbedisa. His brother wanted to disqualify her from him by means of a גֶט, as the halacha is that if one of the potential yevamin gives the יְבָמָה a גֶט she may no longer enter into יִבּוּם with the others. Seems like he wants to obstruct his brother out of getting their dead brother’s real estate that their sister-in-law now owns (we might call this “lock-blocking”).

The brother said to his sibling: Why are you doing this? Is it due to your jealousy that the property will belong to me through יִבּוּם? Tell you what – I’ll make a deal with you. If you let me perform יִבּוּם, we’ll divide the property in half. Hold on — is this kind of a back room deal kosher? Well … like most other things, it depends. And in this case, it’s a מַחְלוֹקֶת between Rav Yosef and Abaye.

Rav Yosef said: Since the חַכָמִים said that one may not sell the property of a widow waiting for her יָבָם before marrying her, his sale is not a valid sale. So too, his promise to give half the property to his brother, which is equivalent to a sale in this case, isn’t valid. We learned regarding one who died and left a widow waiting for her יָבָם with property in the balance worth one hundred maneh (equivalent to ten thousand dinars) that although her כְּתוּבָּה is worth only one maneh (so there is plenty of $ to cover the line), the יָבָם may not sell any part of his possessions, as all of his property is mortgaged for her כְּתוּבָּה. Since the חַכָמִים prohibited him from selling it, if he did so the transaction is void.

Abaye said you shouldn’t make this arrangement lecahtchila, but if you do it b’dieved the sale stands, indicative of the dispute between Beis Shammai and Beis Hillel. רַבִּי חֲנִינָא בַּר פַּפֵּי said: “I’ll side with Rav Yosef on this one” (that the sale isn’t valid).

The Gemara then seems to go around in circles, arguing about whether the discussion about validity of the sale is itself valid. And ultimately the outcome seems to follow the opinion of Abaye – that the brother shouldn’t make this back-room deal with the next brother in line for יִבּוּם, to appease him by splitting the property. But if he does, we let the deal go through.