A couple of weeks ago I wrote about how Mickey Jannis was opening eyes in the Arizona Fall League.  So when I saw that the Scorpions were on the Desert Dogs schedule today, and noticed that Mickey hadn’t started since before the Fall Stars Game, I calculated that he was due to be on the mound.  Sure enough, when we arrived at the ballpark in Glendale, Mickey was in the lineup as the starting pitcher!

Of course I wouldn’t disturb Mickey before the game, but smiled and wished him luck from afar as #40 took the stride in from bullpen warmups. 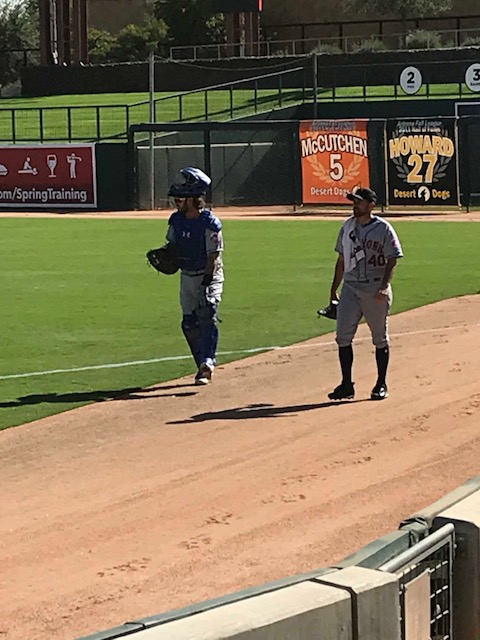 Seats behind home plate are plentiful in the AFL, providing a perfect vantage point as Mickey unleashed his first pitch for a called strike to the Desert Dogs leadoff hitter, Danny Mendick.

Mickey got into a bit of hot water in the first inning by loading the bases with one out, but escaped without a run by cleanly fielding a shot back to the mound off the bat of Phillies’ prospect Cornelius Randolph and firing home to start an inning ending double play. 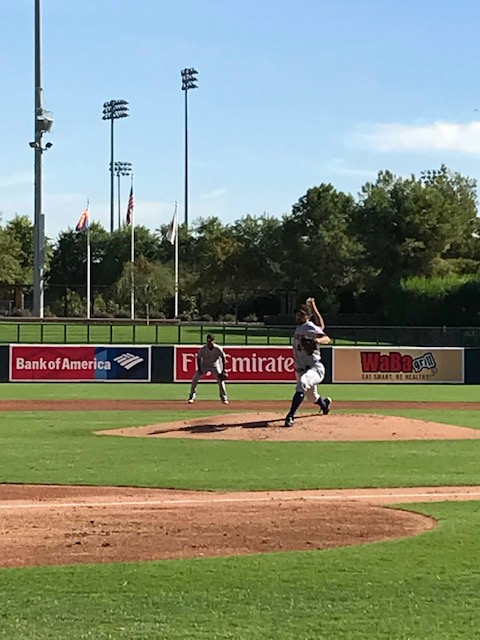 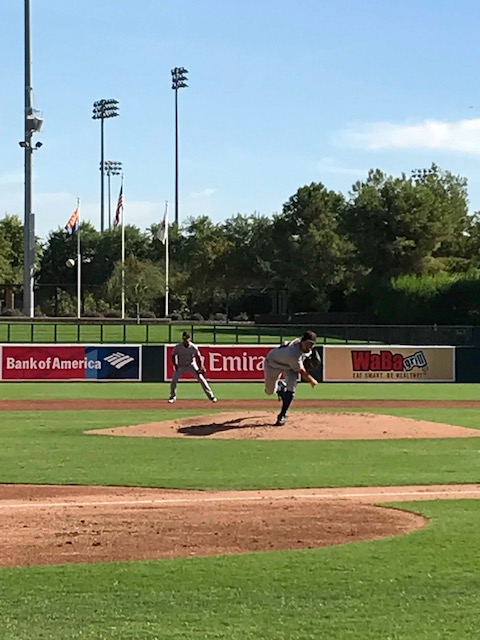 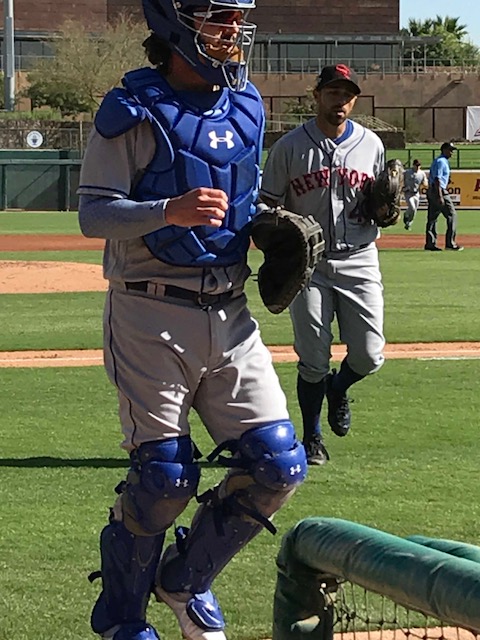 Mickey is known for his knuckleball, but what makes him successful is how well he can mix in a fastball to keep hitters off balance.  His last pitch of today’s appearance was his signature knuckler to whiff Phillies’ prospect Edgar Cabral — so befuddled, that he whacked Mick’s battery mate Tomas Nido on the backswing.

Although Mickey gave up 9 hits and 3 earned runs over 5 innings today, his numbers for the Fall remain stellar with an ERA of 1.64, a K/BB ratio of 19/5, and opposing hitters batting only .195 against him.

And then it happened.  I noticed after the bottom of the first that there was a little cheering section for Mickey with the Mets’ blue coloring and orange lettering that read: “Knuckle Down” with a backwards “K”.  Last year there were Tim Tebow devotees who followed his improbable story swelling Fall League crowds.  Could it be that Mickey Jannis was developing his own cult following? Curious I approached the blue T-shirts who proudly introduced Mickey’s fiancee, Emily (matching Mets hat) and Mickey’s mom under the umbrella.  And guess what?  Emily and Mickey are getting married on Sunday! 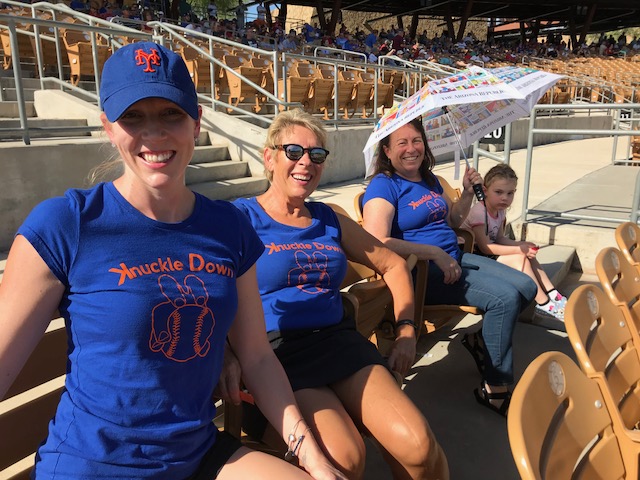 Mickey was all business during the game and all smiles afterward, as the destination wedding entourage made their way down to the field. 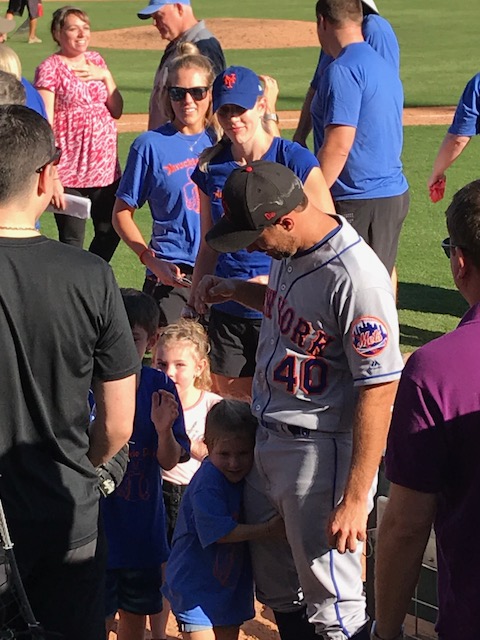 I was asked if I could take a group photo, which I was more than glad to do as family and friends first posed for a traditional shot, and then a group knuckle-down. 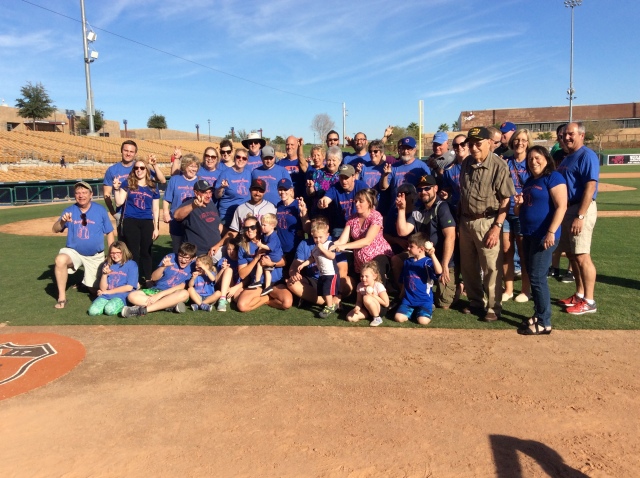 Now, among my prized possessions, is a uniquely signed pre-wedding ball.  If you’re a baseball fan, more importantly if you’re an old Phillies baseball fan, you’ll notice that Emily’s last name is Callison.  I asked her Dad if there was any family relationship to a Phillies star of my youth, Johnny Callison, and he wasn’t aware of any.   As SABR history notes Callison was touted to be the next Mickey Mantle, after whom Mickey Jannis was named. 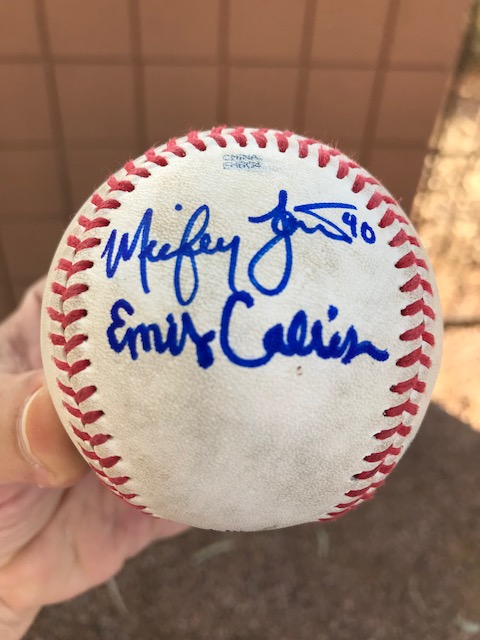 Mickey’s Dad and I shared the irony, and I was left with a very warm feeling about the special family bonds through baseball.

Congratulations to Emily and Mickey, and to the extended Callison-Jannis clan on all counts.  I’ll be rooting for them, and for another reunion – this time at Citi Field or Citizens Bank Park!

P.S. – obviously I’m not the only one noticing!  After posting this, two other nice pieces just posted came to my attention – one from Cut4 and the other from Rising Apple.  For more details on Mickey’s journey, take a look at this piece from the Reno Gazette Journal.

UPDATE 2019:  Mickey writes about his journey