The Lester of the Evils 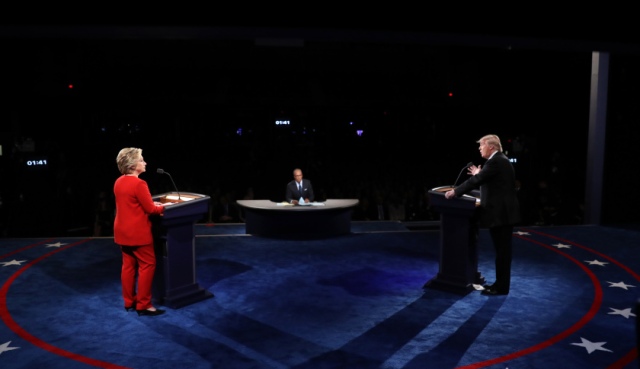 See that little man in the center of the screen?  That’s Lester Holt who had no clue how to moderate a debate, largely sitting quietly by as The Donald ran roughshod over any attempt to get him to respect the clock.  The Donald did something amazing tonight – for the first time in Presidential Debate history, he invoked the name of Howard Stern (as support for his claim that he was not supportive of the War in Iraq).  I have a simple question to pose to NBC:  Why wasn’t Lester given a cutoff switch, so when he said he was giving either candidate 20 seconds to finish their “rebuttal”, he could actually enforce it?  Instead The Donald ran roughshod over Lester’s feeble attempts to impose any real time or subject constraints,  turning Lester’s best efforts into a journalistic embarrassment of epic proportions.

“Trust me”.  “It’s a beautiful thing.” “It’s a disaster.”   “It’s unbelievable.”  “Believe me …” (The top five Trumpisms.)  And as The Donald was trampling the clock, Hillary had this inexplicable smile plastered on her face – as if her advisors were in her ear with reminders to appear more warm and friendly.

You’d learn alot more about the candidates, and with alot more substance than by watching these prime time fiascos, by reading Pulitzer Prize winning columnist Maureen Dowd’s marvelous book, The Year Of Voting Dangerously.  Believe me.

2 Responses to The Lester of the Evils