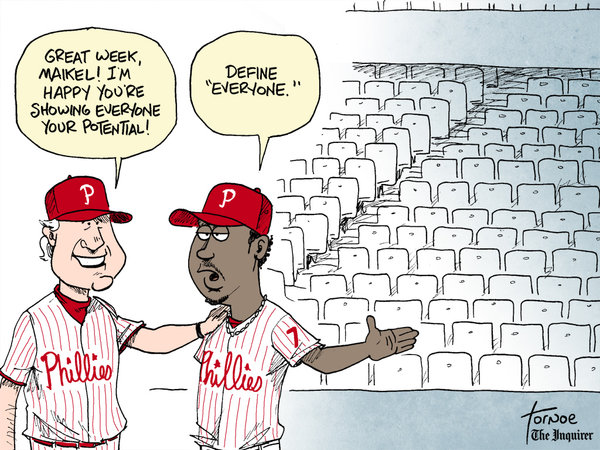 The Phillies have awakened this week against the Yankees with a bang, letting the young guys finally play consistently, giving the old tired look of Utley, Howard, and Ruiz a rest.  Utley, the consummate tight-lipped player who never admits anything is wrong, finally went to the DL after it became painfully obvious that his .179 batting average and .532 OPS was not just a slump.

Ironically Utley adopted Cody Asche last year, insisting when he came up that Asche have the locker next to him, and Cody has displayed the same tight-lipped demeanor as Chase with offensive production almost as limited.  Whether or not Asche can swing a bat in the major leagues as well as Chase did for many years remains to be seen, but I like that the Phils are giving him an opportunity to sink or swim.

Asche was displaced to left-field because the Phillies hoped Maikel Franco would emerge to be the superstar at 3B they’ve lacked since Mike Schmidt handled the hot corner as a kid out of Dayton, Ohio with two very bad knees.  Franco is certainly on fire this month, but you won’t see Phillies fans rushing to fill the seats at Citizens Bank Park just yet.  After all, it was only two years ago that Domonic Brown excited the fan base with six torrid weeks of long ball that landed him on the All-Star Team, only to disappear after pitchers made adjustments, as they inevitably do, that DB couldn’t counter.

So we’ll enjoy being Francophiles while it lasts, loyal to a Phault ….