Love the song.  Even better, from the Phillies standpoint, is the news that they’ll be missing Yu Darvish – The Texas Rangers pitcher who was due to oppose Cliff Lee on Opening Day.  Phils need all the breaks they can get to have an April that doesn’t leave them seriously battling for last place, given the loss of Cole Hamels for the month.  The Stark Truth is this club might need Moyer and Stairs to climb out of the booth.

Speaking of baseball and music, my Spring Training brother tossed me a CD from The Baseball Project – a supergroup of sorts I had never heard about, built around a love of the game.  One tune from the album really stood out as different, and that was the one about The Death of Big Ed Delahanty.

Who was Big Ed Delahanty?  His plaque on the Citizens Bank Park Wall of Fame tells the story that he was one of the best all-around hitters in Philadelphia Phillies history and arguably one of the best hitters to ever play the game.  Remember when Jimmy Rollins set a new club record for the Phils in 2005 by getting a hit in 35 consecutive games?  Guess whose consecutive game hitting streak he broke. 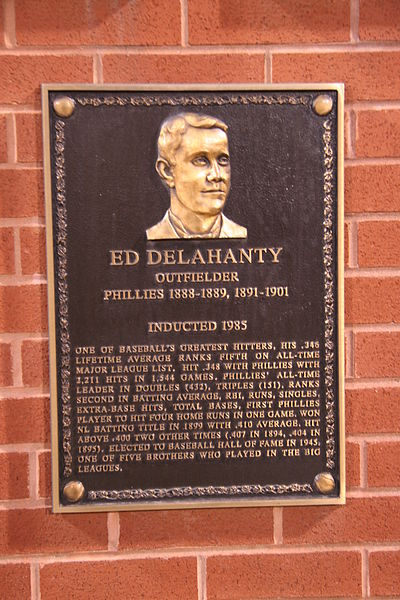 The Baseball Project seems to have singled him out for a song not because of his career stats but because of the intriguing circumstances of his death.  He was a big drinker and a man of questionable morals who either plunged into Niagara Falls of his own accord or not.  The Project has now immortalized another ex-Phil known as much for his drinking and questionable judgment as his bat.  Today they released their third album and this track, From Nails to Thumbtacks:

If you can’t figure out who the song is about, here is a clue.