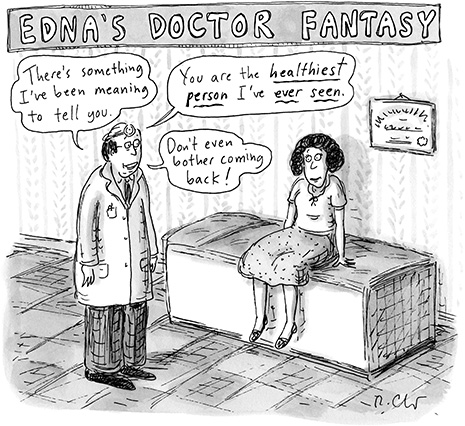 No laughing matter, this satirical depiction in a long line of savvy cartoons from The New Yorker magazine.  We’ve had our fill of the medical system lately, which I am not blanketing with blame, by any means.  After all, some of my best friends are MDs (you know who you are).  Although I will say that the title of a new book from two change leaders in health care caught my eye.

You might think I’m just in a foul mood (which may be the case), but our recent experiences with the healthcare system have been frustrating, to say the least.  If nothing else, it nudges me during our staff meetings to remind everyone how we get notes in the mail such as the one that came yesterday:

To Dr. Press and Staff,

We want to express our appreciation for helping Yossi reach his goals!  We are all enjoying the progress he’s made!  It was also a pleasure to deal with such a knowledgeable, friendly, and professional staff!

We had quite the opposite experience at an in-patient orthopedically-centered Rehab Facility over the past few days.  On the heels of the revision surgery that Miriam undertook, she transferred to a rehab facility that we used the first time around.  Their online motto is:  A healing place between hospital and home.  Ha!  Determined to do well, Miriam was up in spirits but paired with an elderly roommate who was up complaning half the night.  Actually half is being generous.  So Miriam very pleasantly asked her the next day to buzz for the nurse if she was having difficulty, so that she could get some sleep and do some serious PT and  OT the next day.  Sure enough, her roomie was a model citizen the second night, but it was the nursing staff that knuckleheaded things up.  Long story short, the nurse who came in at 1AM turned the room lights on and was talking at peak volume, while roomie pleaded with her to keep her voice down as to not awaken Miriam.  To no avail.

Mottos and vision statements are a dime a dozen; living up to them is another story.  In the morning a phlembotomist came in to draw blood.  Miriam advised him, as she does whenever she has blood drawn, that her veins collapse easily.  He drew one vial and went to obtain another when the flow stopped abruptly.  What he did next was brutal, rotating the needle around while fishing for a better connection, Miriam contorting in pain.  We finally said to him enough is enough, and he would need to leave and get someone more experienced to come in, mostly likely to do a butterfly, the fallback procedure.  In short order her arm went black and blue with edema at the site of the crime.  Excellence in care?  We don’t think so.

We spoke to the house MD in the AM about whether or not Miriam could be discharged a day ahead of plan if she was doing well.  His response?  Look, I’m just an MD.  In the early afternoon, the Social Worker paid a visit, apologizing for Miriam’s nighttime travails, and offered that she could check out of the facility in the evening to go home and shower, catch more than a few Zs, and return by 8AM.  Miriam called me right away, ecstatic at this option, and we  arranged that I would pick her up in the evening on the way back from the office.  I arrived shortly after 8PM, and the head nurse asked me where I thought I was going.  “I’m here to pick up my wife; we’re going home for the evening”.  Oh no, she sternly advised.  She had no orders permitting Miriam to go.

Another long story short … we got the Rxs, the care orders, and departed.  We’ll get PT and OT at home as needed, insurance be damned, and good riddance to the Rehab Facility where Patients Come Second.  Rest assured their owners will receive a letter about leading change by changing the way they lead.  Enough is enough.

6 Responses to Phlebotom of the Barrel