“Revision” Surgery Is Too Light A Term

The field of Medicine has a lovely term for surgical procedures attempting to do damage control, especially when the damage is iatrogenic. Such is the case regarding the Stryker Rejuvenate Modular Hip Implant.  This modular device was supposed to be a more anatomically correct implant, better suited to the mobility of relatively young patients, and when we met with the orthopedic surgeon we selected in 2011 we were sold on its safety.  We had heard of problems with other hip implants, which resulted in tissue damage from the leakage of metal into surrounding tissue.  It wasn’t a pretty sight, and required “revision” surgery, yanking out the initial implant and re-implanting a new one in part or in whole.

Revision is such an innocuous sounding term; revision surgery is anything but.  It has its own set of challenges, and is more invasive than the surgery done the first time around.  It is difficult enough to face the challenge of this surgery under optimal circumstances.  To have someone go through it a second time within a year or two borders on, well … the attorneys will tell you.

Heavy metal from heavy marketing.  My wife’s cobalt levels were sky high by the time her surgeon suggested that she have her blood tested after the MRI showed a cyst encapsulating tissue around the hip implant.  The Stryker Rejuvenate apparently sailed through the FDA process because it was so strikingly similar to its predecessor, the DePuy model manufactured by Johnson & Johnson.  The issue here is what the companies knew about their defective implants and when they first learned of it.  Equally important, what did the surgeons know?  For example, if a surgeon could have predicted that the Stryker Rejuvenate would cause problems similar to the suspect DePuy model after which it was patterned, shouldn’t patients have been given informed consent?

After the rehab process is considered complete, an orthopedic surgeon shouldn’t rely on casual questioning about a patient’s level of pain in order to judge whether there is subsequent tissue damage from an implant.  The patient may be in the habit of taking medication to dull pain, or have a good night’s sleep, and therefore not consider pain to be problematic.  The true test of pain would therefore be to go for several days without any painkillers and then report the extent of discomfort.  This orthopedic parts replacement business has now developed a checkered enough track record that more proactive if not preventive measures need to be taken.  The population isn’t getting any younger, and these types of procedures are only going to increase in numbers.

There I was last week, a year and a half since we went through the first hip implant, sitting on pins and needles in the surgical waiting area, tracking the progress of my wife’s surgery  who was literally a number on a screen with an excruciatingly slow swath of green meandering toward the blue finish line.  A few days prior to the surgery we were advised, like a delayed flight at the airport, that we had been pushed back to 2:30 instead of having a morning slot.  That made the waiting all the more disconcerting.  I knew just enough to worry:  Would the surgeon have to excise any necrotic tissue?  Would any of the bone structure surrounding the stem be damaged enough that it would crack in the process of out with the not-so-old and in with the new?

The staff left, the family members whose loved ones were done ahead of us had cleared out, and the surgical waiting area was now as dark as my mood.  Finally, three and a half hours after the process commenced, someone from the main reception area came by to tell me that the surgeon was on the phone.  The procedure went well, he said, though he was surprised by the extent of tissue damage and bone alteration.  MRIs give you an inkling, though the damage confronts you when you go inside.  We are fortunate to have a great support network, and survived the immediate post-up recovery in the hospital, a cowboy’s adventure ride in the ambulet to the rehab facility, and now the arduous process of PT/OT+, knowing the recovery process is going to be much more difficult than the first time.  But did it have to be this way? 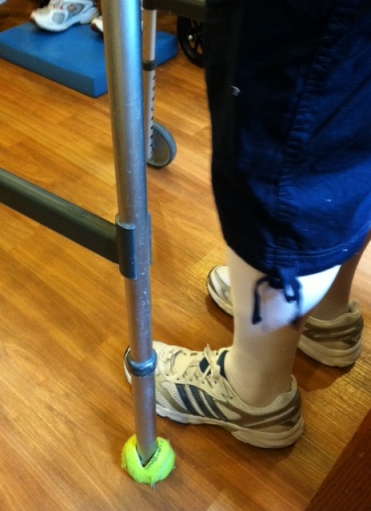 4 Responses to “Revision” Surgery Is Too Light A Term