Gasoline Prices and the Folly of Government Controls

Here’s a picture you may have seen around the Internet, with Regular gas costing you the price of an arm at the pump.  Higher octane will cost you the price of a leg.  Need Super?  Be prepared to part with your first born.  That would funny were it not almost true, with gasoline prices having spiraled out of control this spring.  Yet gas prices aren’t this broadly categorical at all.  In reality, they are one of the most blatant examples of price fixing in the marketplace today, and one toward which the government has seemingly turned a blind eye. 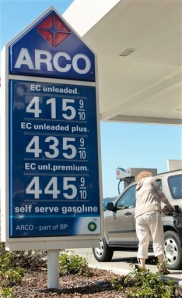 Think about it.  If you use this sign as a reference, I’ll bet you that virtually every gas station within a couple of miles of that station has almost the exact same price.  Now here is the real folly.  Are you aware that when professionals such as doctors gather at an organizational meeting they are technically prohibited from discussing fees charged to patients because the government considers it “price fixing”?  How absurd is that?  While the government is busy muzzling doctors from comparing fees – in most instances heartfelt discussions geared toward trying to figure out how to manage challenging business aspects of practice – gasoline station owners regularly engaged in raising their prices to keep pace with the station down the block in a literal and blatant whatever the traffic will bear collusion.

Think about it a bit more.  Doctors are supposed to refrain from discussing fees amongst themselves because officials are concerned that this may result in someone charging a lesser amount raising fees to match his higher charging counterpart.  This despite the fact that most physicians already have their hands tied by Third Parties with whom they participate who cap fees, thereby redistributing profits to obscenely wealthy CEOs and CFOs of insurance companies.  This pertains to all form of care, including elective care.  Somehow the government decides that prohibiting doctors from discussing fees at meetings protects the public interest.  At the same time these same patients have no choice but to be impacted by gasoline prices escalating weekly, while officials have no controls in place to curb a very public price-fixing scheme engaged in by oil companies and station owners.  Where is the oversight when it is most needed?

Of course, when the average family sees its fixed costs escalate, it has a domino effect on health care.  When families feel the crunch at the pump, they begin to fore-go what are perceived to be elective services.  This makes a mockery of such concepts as preventive care.  During the Bush Administrations, critics were prone to point out that the First Family’s attachment to oil companies made them loathe to crack down on blatant price fixing at the pumps.  What is the excuse now?

1 Response to Gasoline Prices and the Folly of Government Controls