Most schoolchildren are familiar with the three monkeys who symbolize the principles of speak no evil, see no evil, hear no evil. 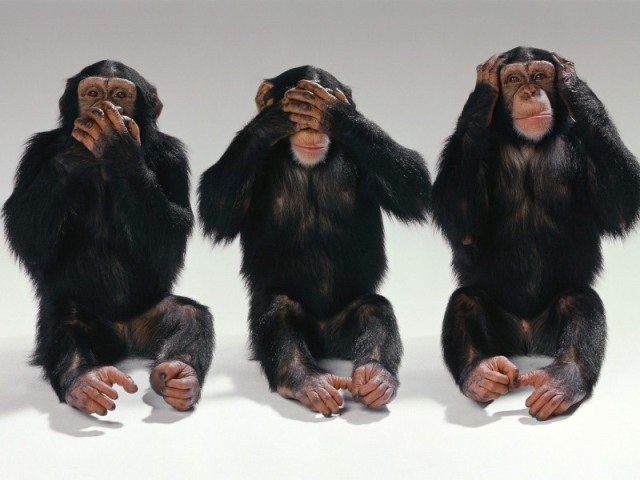 The fourth monkey, crossing his arms, rarely makes into the photo shoot.  Which is odd, since without his “do no evil” maxim the admonition about the other evils wouldn’t be needed at all.

Do no evil has taken a big hit recently, as evil of monstrous proportions made headlines in the visage of Bernie Madoff – bilker extraordinaire.

As has now become common knowledge, Bernie was particularly monstrous in violating the faith of those who entrusted him with their life’s savings.  The returns that he was showing were simply too good to be true, but greed and gullibility are a bad combination.  There’s a phrase in Hebrew, “Loshon Hara”, which literally means evil language – in the context of speaking ill of others.  The flip side of the coin, which gives con men the benefit of the doubt, is what the Madoffs of the world prey on.  Or perhaps, in the case of the latest Ponzi schemer in the mold of Madoff, the world he prayed in.

The jury’s not in yet, but if the front page of the Asbury Park Press on Friday the Thirteenth of 2010 is any indication, misplaced trust is at the heart of the latest scandal to break in the insular community of Lakewood.

To be sure, the Jewish community of Lakewood has much to be proud of.  It boasts a house of higher learning that represents the epitome of morals and ethics.   This makes the scene of a family man with a yarmulke, being led from his house handcuffed and shackled, all the more incongruous.  Incongruous, perhaps, but not incomprehensible.

There is a paradox if not a serious risk in organized religion, one that is not unique to Judaism.  Someone or some group has to support the many efforts of institutions who embody the communal religion.  Pascal Boyer put his finger lightly on this in his ambitious book, “Religion Explained”.   Where does the money come from that fuels religious institutions and charitable causes?  The Lakewood developer who is the latest alleged Ponzi schemer well understood that steeping oneself in charitable causes buys a lot of “speak no evil”.

What then should the appropriate reaction be to Ponzi schemes of the magnitude that Madoff and his latest alleged financial soul mate have masterminded?  There is the temptation to think that the people who lose fortunes with dishonest investors somehow contribute to their own misfortune.  If this were physical rather than financial rape, such blame-the-victim shallow thinking would be deemed reprehensible.

In the final analysis perhaps none of us would escape unscathed if held up to scrutiny by the media.  It matters little what your business practices are if someone has an agenda or an axe to grind.  And Lord knows there have been innocent people dragged through the front pages of newspapers.  But evil on the scale of what Ponzi schemers perpetuate invites at least some communal introspection on how we got to this point.  If, instead, we hide behind the principles of the three monkeys, we risk sacrificing our humanity.